BAGRAM AIR BASE, Afghanistan, Jan. 28, 2008 - When the "Legends of Wrestling" tour rolled in here Jan. 26, service members and civilians gathered at the Morale, Welfare and Recreation clamshell to take part in the festivities.

Diamond Dallas Page and the group of service members and civilians who were tough enough to survive the intense "Yoga for Regular Guys" workout give DDP's famous "Diamond Sign". 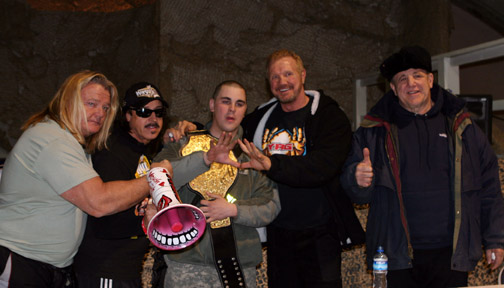 Pfc. Michael Grandi Jr., of Headquarters and Headquarters Company, 101st Combat Aviation Brigade, holds the WCW Championship belt as he takes a photo with wrestling greats (from left to right) Greg "The Hammer" Valentine, "The Mouth of the South" Jimmy Hart, Diamond Dallas Page and Nicholai Volkoff during the "Legends of Wrestling" tour which came to Bagram Airfield on January 26.

For some die-hard wrestling fans, the event was a dream come true.

"I became a wrestling fan in 1999 after constantly seeing it on TV," said Army Pfc. Michael Grandi Jr., a member of Headquarters and Headquarters Company, 101st Combat Aviation Brigade, who has attended numerous live wrestling events.

"I had constant adrenaline pumping during the event," he said of meeting his idols. "It was really cool how laid-back they were. And none of the soldiers were bothering them; they took pictures, got their autographs and moved along. There was a mutual respect."

The meet-and-greet session lasted for just over an hour, with the stars posing and chatting with all comers. Afterward, those who stayed were treated to an inspirational speech by Page, former three-time World Championship Wrestling Heavyweight Champion. In his address, Page told of how he overcame a turbulent family life, a learning disability and other issues to achieve his dreams through a process he called "living life at 90 percent." 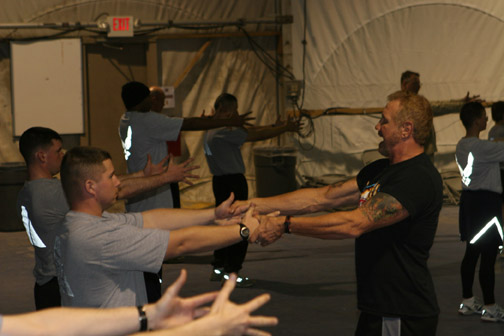 Former professional wrestler, Diamond Dallas Page, checks a Soldier's posture during an hour long session of his "Yoga for Regular Guys" workout. Page along with several other wrestling greats visited troops at Bagram Airfield on January 26.

"I once heard (football coaching legend) Lou Holtz say, 'Life is 10 percent of what happens to you and 90 percent of how you react to it,'" Page said. "In our personal lives and our professional lives, we are constantly hit with one adversity after another, most of which we have no control over. The one thing we have control over is our mindset."
Page introduced the audience to his no-impact workout system, which he calls "Yoga for Regular Guys." Page said he scoffed at the idea of yoga until a spinal injury threatened to keep him out of the ring.

"When I got injured, my wife tried to get me to do yoga," Page said. " But I always thought yoga was for sissies. I learned that flexibility was the key to youth, not just in the body, but in the mind. I wanted to get back to wrestling so badly that I started doing it. "

At the completion of his rousing speech, Page received a standing ovation from the audience. After signing more autographs and taking photos with fans, he led all those who stayed behind through an intense hour-long session of Yoga for Regular Guys.

The program, which consisted of slow-count isometric exercises, static holds and various yoga poses, managed to raise heart rates and get the crowd sweating.

"I liked it a lot, it was an awesome workout," said Army Chief Warrant Officer Stephen Cranford, Company C, 3rd General Support Aviation Battalion, 82nd Combat Aviation Brigade. "I am going to get the DVD and keep doing it. Once I get better, I will introduce it to my guys for (physical training)."